The Marine Biodiversity Hub is a collaborative partnership supported through funding from the Australian Government and is administered by the Department of the Environment (formerly Sustainability, Environment, Water, Population and Communities).

Funding programs - including summary tables of themes and projects

The National Environment Science Program (NESP) is a $142M initiative of the federal government to provide applied environmental science in key areas. The  Program will assist decision-makers to understand, manage and conserve Australia’s environment by funding world-class biodiversity and climate science. (Note:  There was a change of spelling from Programme to Program in 2017) 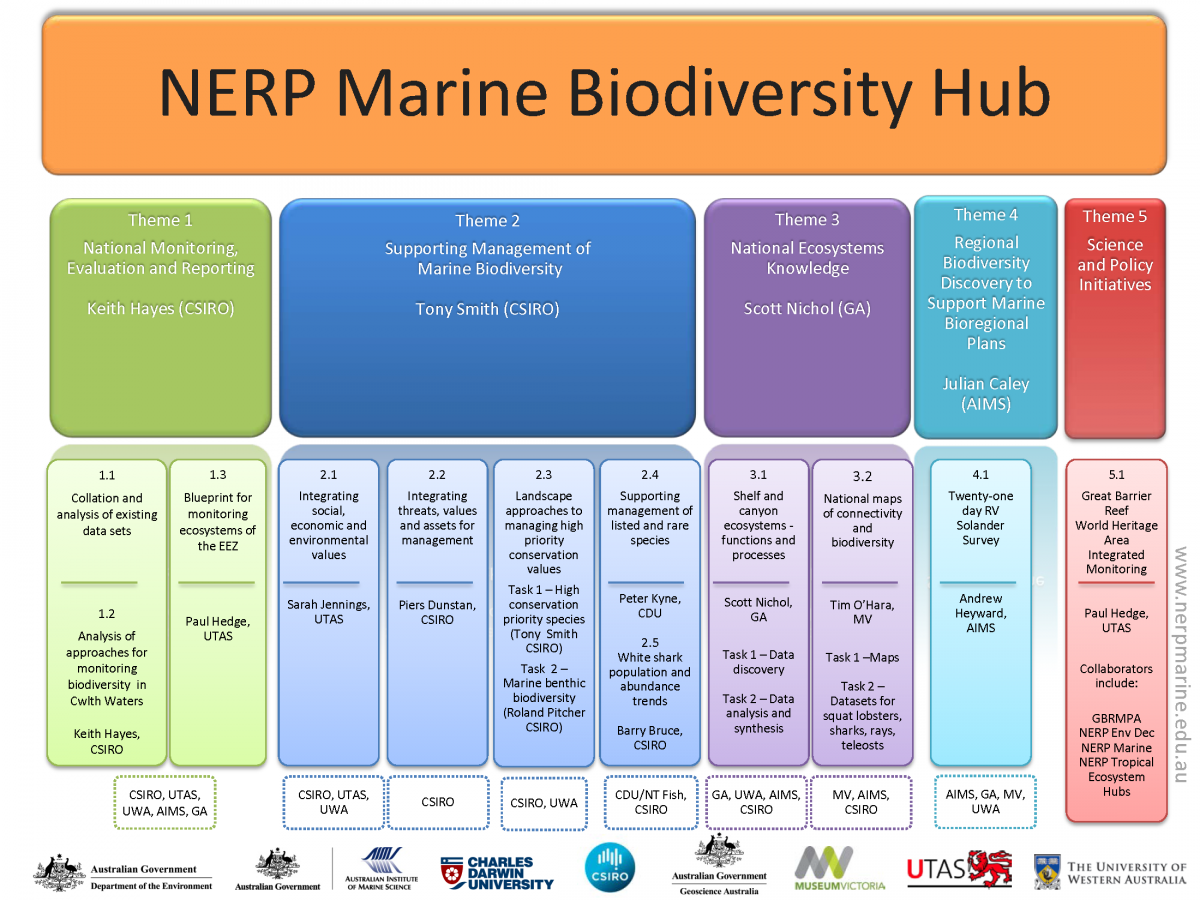 The NERP Marine Biodiversity Hub projects aim to provide scientific information and advice that will support the Department of the Environment in its decision making in the marine environment, specifically in implementing and monitoring marine bioregional plans, developing the National Representative System of Marine Protected Areas (NRSMPA), and supporting the information needs of the department in providing key baseline information.  This will be accomplished through four tightly integrated national themes, which will allow the Marine Biodiversity Hub to provide consistent scientific data, information and advice to the Commonwealth, States and Northern Territory.  New survey activity will be focused off Northern Australia (North to Coral Sea), in recognition of its global marine biodiversity significance, the rapidly increasing pressures facing this region and the paucity of current information.

The NERP Marine Biodiversity Hub provides scientific information and advice to support decision making in the marine environment, specifically in implementing and monitoring marine bioregional plans, developing the National Representative System of Marine Protected Areas, and supporting the information needs of the Department of the Environment in providing key baseline information.

The Marine Biodiversity Hub is supported through funding from the Australian Government’s National Environmental Research Program (NERP), administered by the Department of the Environment.

The 5 themes of the Marine Hub under the NERP program include:

The University of Tasmania was the Hub co-ordinator and signed the Funding Agreement with the Commonwealth in 2007.  The hub continued under the CERF program until December 2010 and received funding of $6 million under the CERF program.  The Partners contributed $12 million of their own funds to the initiative.

Reports and outputs from the CERF program are still available by searching this website.