How many seamounts are there in the world’s oceans?

How many seamounts are there in the world’s oceans?

Ships with echo-sounders, especially modern vessels with multibeam swath-mapping systems, can map the bathymetry of the seafloor and detect even small seamounts with incredible detail and accuracy. These ships send out a fan of acoustic signals either side of the ship, and integrate the return signals that bounce off the hard seafloor and can map the seafloor over areas much wider than the vessel track (see figure).Although you can’t see them under the water, seamount features are one of the most common forms of topography throughout the world’s oceans. They are essentially undersea volcanoes, often defined as being more than one kilometre in height, but ecologists recognise them as important and distinct even when they are as small as 100 m in elevation. Imagine the variety of landforms that occur on land, with large mountains down to hills . . . that sort of topography is mirrored in the seascape several kilometres under the sea surface.

However, the oceans are vast, and only a small proportion of the ocean area has been surveyed. While echosounder detection is necessary for the smaller seamounts, larger features can be observed indirectly from space. An earth-orbiting satellite with radar altimetry sensors can measure the height of the ocean surface, and variations in this caused by seafloor topography. If the seafloor was completely flat, then so too would be the ocean surface. However, the seafloor has lots of irregularities just like the land, with negative ones such as trenches and canyons, and positive ones like ridges and seamounts. These result in small perturbations of the earth’s gravity field because of changes in geology (such as dense basalt rocks of a volcano) or topography (large deformation of the seafloor). This results in an anomaly between the measured and theoretical ocean surface (see figure), and can show where seamounts occur many thousands of metres under the surface. This approach has been used to create bathymetric grids of the entire ocean seafloor, complemented by more detailed echosounder measurements. 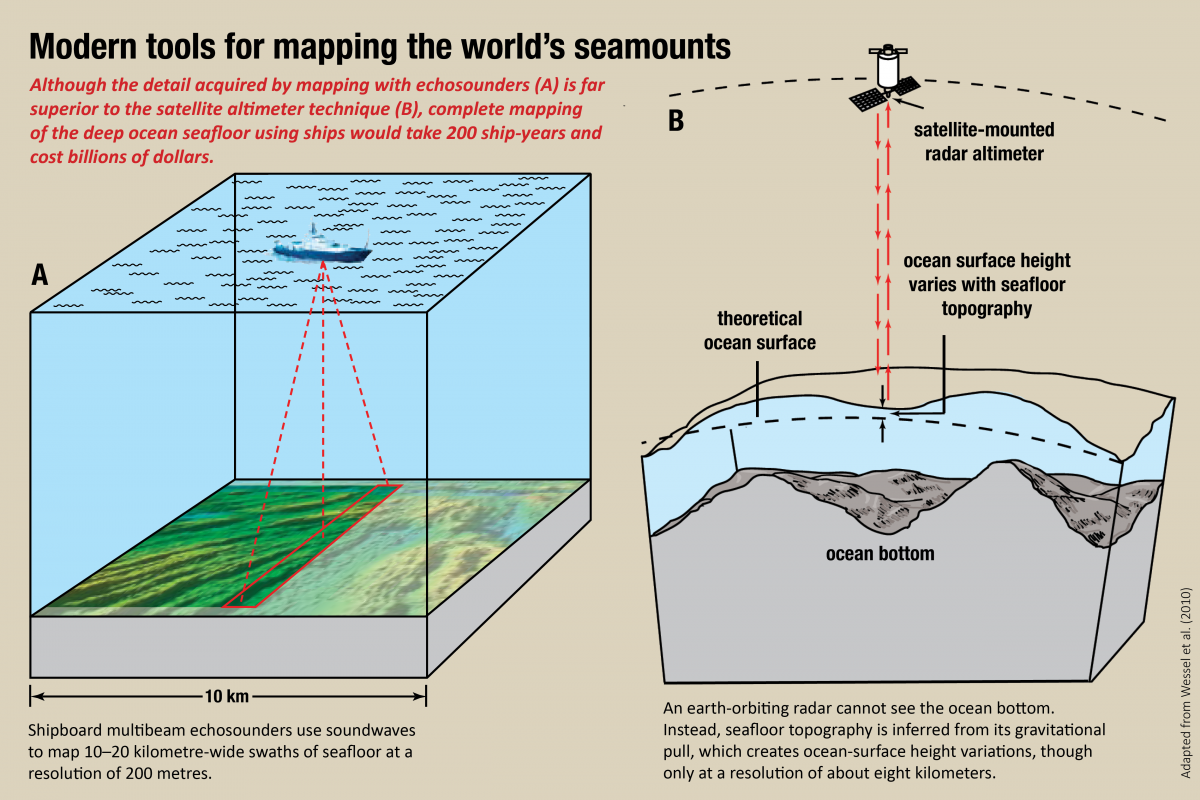 The first grids were compiled in the late 1990s at a spatial resolution of two minutes (a dataset termed “ETOPO2”), but satellite data has since improved to enable this grid to be created at much finer 30 arc-second resolution (“SRTM30”). The availability of a complete ocean-scale grid enabled algorithms to be developed to identify seamounts in most parts of the ocean, even where ships had never been. A common algorithm involves taking the summit position of a potential seamount, then laying out eight radii of 20 km, spaced at 45 degrees: depths in each cell are assessed against several criteria that define the shape and size of the feature. If all are met, it gets classed as a seamount.

Although similar grids have been used in different studies, the estimates of seamount numbers vary depending on the mathematical model used, and the degree of extrapolation into areas that are poorly sampled or not well covered by satellites. The number of estimated large seamounts (higher than 1 km) range from 10,000 to several hundred thousand; and for smaller seamounts (knolls and hills down to 100 m height) numbers range from 100,000 to tens of millions. There is no single “right” answer, all these estimates can be justified. However, there is a similarity in estimates from several studies, and those using the best available data and robust algorithms suggest about 35,000 large seamounts, and about 140,000 small seamounts.

The numbers of seamounts differ between oceans. The Pacific is the ocean with the largest number of these features (60% of large seamounts, 50% of small ones) and the south-west Pacific is especially rich in smaller features. There are well over 100 of these types of features in the Tasman Fracture Zone and Huon marine parks. Most were mapped with multibeam echosounders off a CSIRO vessel in 2006, and hence their location and characteristics are well known. This is an essential foundation for the type of detailed survey work we will be conducting, and you will learn more about from this voyage.