A roundtable discussion at the Australian Marine Science Association conference in July gave scientists, managers and policymakers the chance to discuss better ways of seeing each other’s point of view.  The discussion followed a symposium on connectivity science, (sponsored by the NERP Marine Biodiversity Hub), that built on interest expressed by the Department of the Environment in the Hub’s canyon connectivity research.

Symposium organiser, Johnathan Kool of Geoscience Australia, said the aim was to stimulate an interactive conversation: to find areas of common interest among managers and scientists and help to guide future research. He says there were 12 presenters, 12 discussion participants, and more than 100 attendees during the day, including researchers and marine environment managers from Commonwealth and state agencies and universities, and industry consultants. ‘Scientists need to connect managers to timely, relevant information, but too often they speak different languages,’ Johnathan says. ‘We are from separate disciplines with views and priorities that are not always visible to one another, so we need a means of exchanging the different perspectives. Scientists may take for granted that everybody understands the scientific method, and managers may expect that everyone recognises that there is a political aspect when making decisions’

Johnathan says that connectivity science provided a gateway to the larger problem of reconciling different world views of science and management.

‘Marine protected areas, while often treated individually, are part of a greater networked whole, and connectivity science explores relationships between the different areas; we have valuable scientific information, and we need to talk with managers to understand how to leverage it in the best possible way, he says. ‘For example, while a strong biological foundation forms the core of our research, there needs to be open, honest recognition of social and economic factors. ‘We need to communicate in ways that get us on the same page, and provide good, transparent information as a basis for sound decisions: it’s not enough to just provide data. ‘We need to ask: How could this information help end users? What sorts of things interest them? Is the work that we as scientists are doing useful, or do we need to think about different directions?’

Lessons from the roundtable 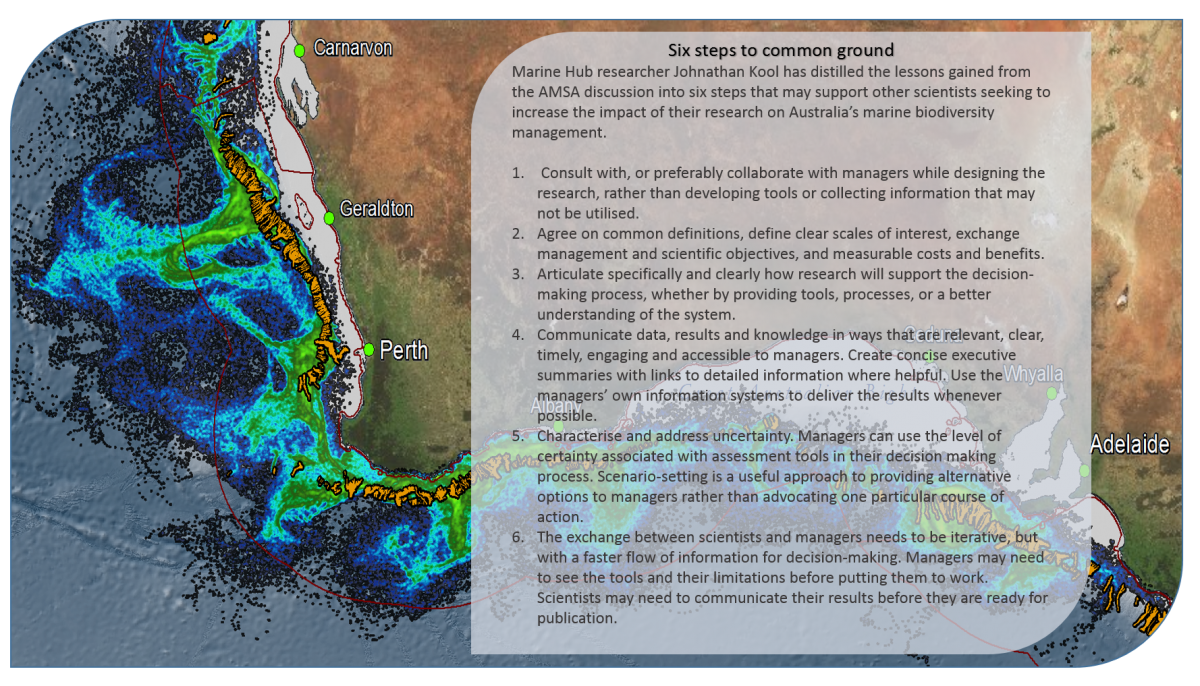 Johnathan acted as facilitator for the roundtable discussion, and felt his domain-specific knowledge helped to maintain focus and momentum. Another positive factor was the AMSA forum, which was already of interest to scientists and managers.

‘Our conversation was relaxed, yet engaging,’ he says. ‘There were disagreements, but everyone was respectful of one another’s point of view, and in fact it was the points of departure that often were most enlightening.’

In relation to the symposium, Johnathan says it would be good to see presentations from managers as well as scientists, if only to explain current initiatives and programs.

Amanda Parr from Parks Australia, a division within the Department of the Environment, says the opportunity to discuss how scientific research could inform the management of the marine environment was invaluable for managers.

‘We need to enhance the capacity of people working in both marine science and management areas to understand and communicate across both disciplines,’ she says.

Sharon Appleyard from CSIRO said that while there were not as many policy makers or managers as she had hoped for, the marine managers that attended gave valuable feedback on communicating with policy makers. ‘The main advice was to be more straightforward and concise, and to take the time to develop and foster working relationships and explain the science,’ she says. ‘Scientists also need to ask how the management and policy processes work (timeframes are often different to those at the ‘bench’), and where and how information is used.’

Supporting a shift in the culture

Marine Biodiversity Hub director, Nic Bax, says the knowledge-broking initiative pursued by the Hub for the past eight years has aimed to increase the impact of science on environmental policy by supporting evidence-based decision making. Another goal had been to extend knowledge gained through the Hub to a wider marine science audience in Australia, and help scientists make a contribution to national (or state) management and policy. ‘These goals are served by strengthening links between research and management, and this relationship has matured considerably through the four-year NERP,’ Nic says. ‘We have moved from packaging information to make it more useful to managers, to a collaboration that starts with defining management needs.

‘The AMSA discussion is a good example of how we can work together to shift the culture from reactively packaging information to proactively defining management needs, and was particularly valuable in connecting junior scientists with managers.’