From his desktop at Taroona south of Hobart, Nick Perkins has a great view of reef habitats that lie beyond the reach of scuba.

For his PhD with the Marine Biodiversity Hub and University of Tasmania, and his masters’ research before it, Nick has viewed hundreds of thousands of images snapped by the autonomous underwater vehicle (AUV) Sirius.

As well as mapping reef communities during these epic stop-motion adventures, Nick is devising ways of analysing AUV imagery so that repeated surveys accurately monitor reefs through time.

‘The AUV is a really cool kit that shows us large areas of deeper water benthic communities,’ Nick says. ‘The challenge for us is to accurately describe what’s down there.’

Nick is building a picture of how deeper invertebrate communities are distributed as a basis for exploring different approaches to sub-sampling AUV images. This involves testing different ways of picking which images to score (interpret) and the number of points at which to score the contents of each image.

‘We need to be able to score images from reef transects in a way that yields precise and repeatable estimates of the cover of important species or groups,’ Nick says. ‘When surveying deeper communities, the geolocation of the AUV imagery also allows us to build patterns of distribution and abundance of these communities and species.

‘This information is important from a survey and monitoring perspective as it allows us to calculate minimum intervals for image sampling, and the precision with which repeat surveys must be conducted. For example, if a coral species is shown to be tightly clustered on one small patch of reef, we might miss it on a repeat survey unless we can redeploy the AUV or any alternative equipment with high precision.’

Nick says the ultimate aim is to show the AUV can be used to monitor reef communities through time, to track changes such as species recovery in a new marine protected area, or declines in species abundance due to climate change.

Understanding accuracy is the key to tracking change

It is guided by Ultra Short Baseline (USBL) tracking, which in combination with the ships GPS system allows precise geo-location of individual images. It is also passively stable in pitch and roll, and has sensors which allow it to record depth and maintain a stable altitude above the seafloor. Continuous, overlapping images are taken, and a typical transect covering the size of two to three football fields yields a hoard of 5,000-12,000 images, each capturing 1.2 m by 1.6 m of seafloor.

‘The system is typically accurate to within one to two metres and has built-in software that recognises previously surveyed features as it navigates, but factors such as currents or location accuracy in deeper waters can affect the accuracy of the tracking,’ Nick says. ‘Gaining an understanding of how accurately repeat surveys can be conducted with this technology is important for determining survey and sample design to track changes through time.’

To score the biology, a random point overlay (usually 50 points) is placed on the image and whatever lies under each point is scored. The scoring is averaged over a reef system to provide a percentage cover. Typically the images are scored to ‘morphospecies’ level: the level at which they can be distinguished by eye. The speed of the scoring process varies according to the complexity of the environment.

‘When urchin barrens are the target, scoring can be quick as individual images can be assessed rapidly,’ Nick says. ‘I’ve looked at tens of thousands of images for urchin barrens.’

Nick says automated approaches to image scoring are mainly limited to habitat classification. Thus these approaches may be applicable in situations such as monitoring levels of coral bleaching. But the technology has not yet advanced to the stage where invertebrate communities featuring different morphologies can be identified automatically. This is a challenge even for human scorers.

Nick began working with AUV imagery with research on the invasive sea urchin, (Centrostephanus rodgersii). His analyses showed the urchin was creating barrens up to 30 metres deeper in Tasmania than in its historical home of New South Wales.

‘The expansion of barrens habitat as the sea urchin expands further south with the East Australian Current is having devastating impacts on biodiversity, with ﬂow-on effects to ecosystem services and local ﬁsheries,’ he says. ‘In Tasmania this threat extends to deeper, invertebrate-dominated habitats, indicating that deeper reef systems need to be incorporated into planning, with increased barrens expected under future climate change predictions.’

Interpreting a world of diversity

Nick is a keen diver and loves to photograph reefs for recreation, but his research time is spent very much in front of the computer, alternating between long patches of scoring, and building models of invertebrate distributions and sampling scenarios.

Even though the image scoring is of mind-bending proportions, (he has Excel files with up to half a million scoring locations) it’s the statistical analysis that Nick finds most challenging. While statistics is not everyone’s cup of tea, and initially wasn’t his, he now has an appreciation of the valuable insights it can provide.

Fortunately, he is simply impressed by the diversity and beauty of the deep sea environment.

‘It’s cool to be able to explore deeper and in more detail with the AUV, especially when you see something different,’ Nick says. ‘The corals and sponge gardens on the 40 m and 70 m deep reefs off Bicheno are amazing. They are all shapes and colours and are quite pretty, like a tropical reef. Some of the black octocorals are as high as 1.5 m and are the largest I have seen.’

AUV full of potential for the future

As Nick nears the end of his PhD, he sees the AUV being used more and more as a productive monitoring tool in the future.

‘If we keep monitoring in the same patterns the results will be really ecologically informative,’ he says. ‘Some of the species could be good indicators. We will see signatures of climate change, and learn things such as how quickly sponges grow, and how they are affected by storm events. ‘You think that you can learn a lot in a three year PhD, but there is always so much more to explore.’

The AUV facility is based at the University of Sydney Australian Centre for Field Robotics and is supported by the Integrated Marine Observing System.

Join Nick on a dive into the Australian Ocean Data Network 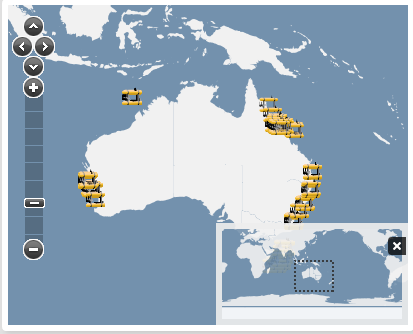 AUV tracks and images can be seen on the Australian Ocean Data Network. You can follow this link to explore reef communities and sea urchins on an area of deep reef near Tasmania’s Maria Island.

Now strap yourself in and follow his guided tour . . .

'This transect has arrows showing the direction the AUV travelled, as well as start (green) and stop (red) points. It is laid out with two ‘dense grids’ that are connected by ‘legs’. We colloquially call this a dumbbell design. The dense grids are designed to give complete coverage of that area of seafloor, and allow software to create 3D reconstructions of the seafloor.

In the shallower end of the transect (left hand end), clicking around will reveal bare rock urchin barrens interspersed with less dense than usual coverage of brown seaweeds dominated by Ecklonia radiata and Phyllospora comosa.

In the diagonal leg, clicking around the area of the arrow will show extensive barrens with large numbers of Centrostephanus rodgersii urchins both in the open and in crevices. This shows what happens when smaller patches of barrens, as found in the shallow end of the transect, coalesce into extensive areas of barrens and the cover of algae and invertebrates has been decimated.

At the deeper end of the transect (the right hand end of the dumbbell), we are into approximately 30 m depth. Invertebrates become more common and exploring this area you’ll see various sponges including cup, finger, encrusting and massive sponges as well as gorgonians interspersed with thinning algal cover. There are also smaller urchin barrens in this area, particularly around boulder and crevice habitat. The urchins prefer this habitat, as they mainly feed at night and shelter in home crevices during the day.'

Remaining images are taken by the AUV at a deep reef off Bicheno in Eastern Tasmania: