Iconic seabirds – albatrosses and petrels – snatch fish and squid along this marine reserve proclaimed in June 2007, that stretches some 600 kilometres towards New Zealand.

Below the surface, seafloor habitats of all description cover depths from 40–3000 metres: from outcrops and canyons cloaked in corals and sponges, to steppes of sandy sediments.

The temperate reef systems here support many mobile and commercially-important species, yet little is known about biological communities beyond depths accessible to divers (below 25 m).

Yet biodiversity inventories at a range of scales, and an understanding of the bio-physical processes that shape these systems, are needed to guide monitoring programs for reserve management.

Flinders CMR has been the focus of a NERP Marine Biodiversity Hub project to help build this knowledge base and monitoring capacity, by developing and testing cost-effective survey techniques.

The three-year project, which began in 2011, pioneered a suite of survey and analytical approaches, and rewarded scientists with the first comprehensive, high-resolution maps of reef systems and associated diversity across the Flinders shelf.

This regional-level variation in reef systems is a clear example of the CMR network encapsulating and protecting a range of major conservation values through a regionally representative planning framework. 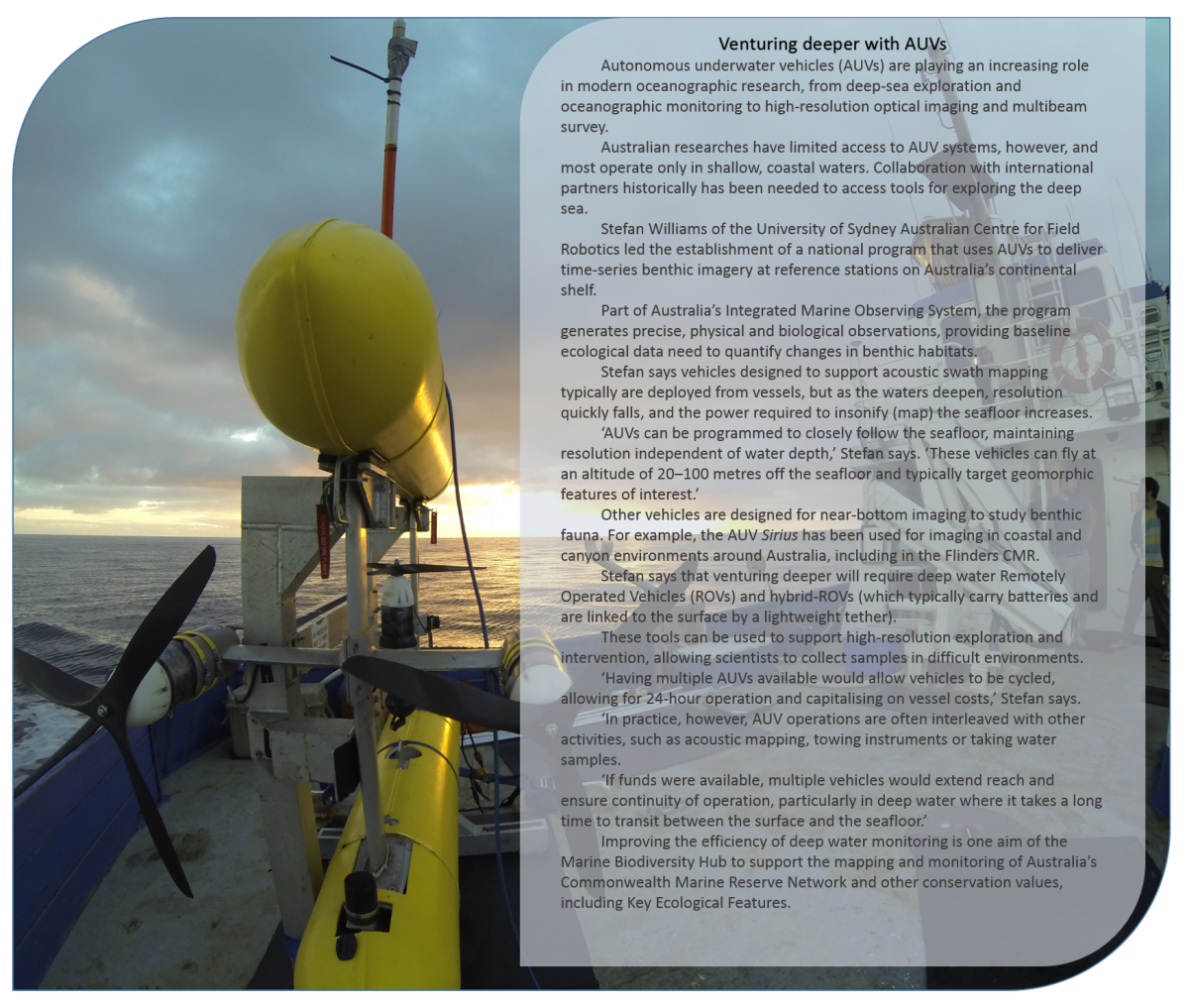 The Flinders CMR project mapped reef habitats on the continental shelf and slope, (such as reef, cobble, sand, mud and canyon), and the biodiversity they support, with a focus on reefs and associated fishes and sessile invertebrates, (such as sponges and corals).

Forty sites were selected for investigation using the novel, statistically-based survey design Generalised Random Tessellated Stratified, which was shown to account well for the spatial distribution of habitats and communities.

Photographic inventories of deep-water fish communities at 500 m depth were made for the first time in the Flinders reserve using ‘DeepBRUVS’ landers: baited, instrumented, camera systems that sit on the seabed.

Electronic controls on these systems initiate and synchronise the cameras, lights, and bait delivery, enabling images to be collected at pre-determined intervals for extended periods (weeks to months). Sensors on the landers measure environmental conditions, including water currents.

‘The project demonstrated that DeepBRUVS have good potential for monitoring seabed ecosystems, and can be cost-effective because they can be deployed and retrieved by passing fishing vessels”, Alan Williams of CSIRO says.

‘We noticed when surveying, that different seabed features such as sand-inundated or step features, had quite different assemblages living on the rocky outcrops,’ Nicole Hill of the University of Tasmania (UTAS) said.

‘So even if you can locate reefs, they will not all be the same, and you won’t necessarily know what is living on them without further sampling.’

‘Ideally we would have a full multibeam map with representative sampling by AUV-based imagery sufficient to reliably quantify the extent and types of habitat we find there, as well as the cover of key benthic species.’ Neville Barrett (UTAS) says. ‘Then fine-scale environmental relationships could be used to predict habitat types and species assemblages across a broader range.’

What can be predicted?

The potential of predictive modelling based on full coverage maps has previously been demonstrated in Marine Biodiversity Hub surveys off southern Tasmania’s Tasman Peninsula.

These relationships were then used to produce regional-scale biodiversity maps (with estimates of uncertainty), and to identify processes and patterns that shape temperate reef communities.

While habitats could be predicted from swath data – particularly large, hard structures such as the tall pinnacles of Hippolyte Rocks – validation with tools such as AUVs is necessary in areas such as the Flinders CMR, where many reefs are low profile and covered in sand. 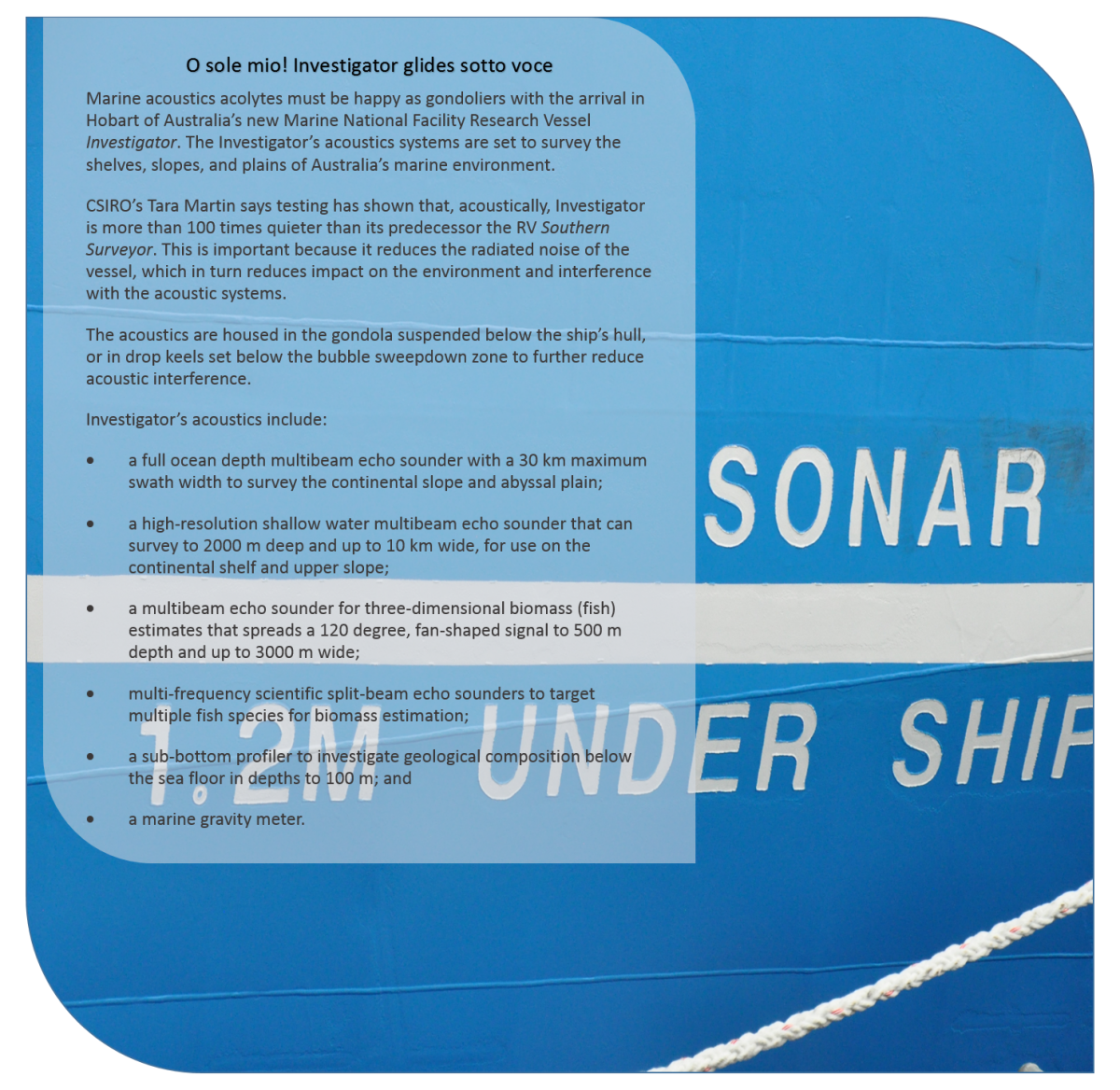 ‘While the slope of the Flinders CMR had been extensively mapped, habitats and biota on the shelf had not been well sampled.

‘By focussing on the statistical requirements for establishing a long-term monitoring baseline, we were able to maximise the information that we could obtain from a time-limited survey.’

‘We certainly have learned a lot from our work off Tasmania,’ Nicole says.

‘Prospectively we have a good combination of techniques for long-term monitoring that are cost-effective, non-extractive, flexible, with high power for extrapolation, and transportable to the deep ocean (a large portion of CMRs).

‘Now that we have an idea of what is there, we are looking at indicator species that might be suitable for informing management. ‘While there is still more to learn, we can begin to track changes while continuing to build up a picture of the values within the reserve.’

This cost-effective approach focussing on the specific needs of CMR managers is a new approach developed by the Marine Biodiversity Hub to support the Parks Australia in managing a vast CMR extending over more than 7 million km2 of Australia’s EEZ.

Thumbnail above - A school of jackass morwong approaches the baited underwater video system set in the Flinders CMR. 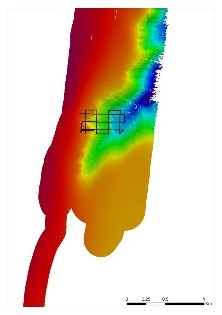 The Finders CMR survey discovered a network of canyon-head incisions into the shelf margin at the shelf-break. One of these is shown here, indicating the rapid change in depth over small distances in this area, with a 300 m change in depth over a 300 m linear distance. This habitat was characterised by steep underwater cliffs, and high water-column productivity, possibly supporting unusually high pelagic fish biomass. The Track of one AUV deployment is shown here. It extends from about 100 m depth to nearly 350 m depth, and collected the first high resolution imagery of such habitats in this region.

Interesting stuff! Would like to see some of the BRUV footage that that frame is taken from :)

Thanks for your comment, Lachlan.  I have added a video under the Further Information heading at the end of this Remarkable reefs newsletter article.  It's called Seabed Habitats of Flinders Commonwealth Marine Reserve - Northeast Tasmania and was uploaded by Geoscience Australia.  You can also check out our YouTube channel for this and other videos. Regards Annabel Ozimec, Marine Biodiversity Hub.

Thanks Annabel, Ill go take a

Thanks Annabel, Ill go take a look at those videos now :)

Project D3 - Implementing monitoring of AMPs and the status of marine biodiversity assets on the continental shelf
Project 2: Analysis of approaches for monitoring biodiversity in Commonwealth waters
Predict Patterns of Temperate Shallow Reefs from Physical Surrogates