In September 2012, as Top End floodplains were drying, NERP Marine Biodiversity Hub and Northern Hub scientist Peter Kyne received an alert that two largetooth sawfish (Pristis pristis) were stranded in a waterhole near the Daly River.

The call was from the Malak Malak Indigenous Ranger Group who knew the sawfish were uncommon because they had been helping Peter and his colleague Richard Pillans with field research.

‘After a two-hour drive across a rugged dry floodplain, we found a tiny, shallow waterhole less than 50 centimetres deep,’ Peter said.

‘We put in a small gillnet and found nine sawfish and two barramundi, just holding on, so we collected them and returned them to the river. Two weeks later the waterhole was completely dry.’

Peter says the largetooth sawfish are born at the river mouth then move upstream, often spreading out into floodplain billabongs, but sometimes they can pick the wrong one.

‘These floodplains can be really productive, with lots of food, but the fish can get trapped if the billabongs don’t reconnect with the river the following year, due to late rains or a hot dry season.’

Peter and Richard have been sampling and tagging largetooth sawfish, speartooth sharks (Glyphis glyphis) and northern river sharks (Glyphis garricki) in the Top End for the past two years, seeking information about the species’ life history and populations to guide decisions about conservation, wildlife trade regulation and management.

‘These sharks grow slowly, mature late and produce few young,’ Richard said. ‘At present their management is precautionary because we don’t know enough to assess whether populations are stable, declining or increasing.’

The scientists have spent more than 150 days combing the rivers, billabongs, and muddy pools of nine major river systems. The sampling has involved setting gillnets in likely habitat and watching well into the night to ensure that any captured animals do not remain in the nets too long, or be eaten by crocodiles.

They have worked year-round, despite difficulties posed by the wet season, although it’s sometimes impossible to drive into flooded areas or set nets in a roaring torrent of water.

In that time, they have fitted internal acoustic tags to more than 165 individuals to provide information on movement and migrations, habitat use and survivorship.

Peter and Richard have been surprised by the rarity of the largetooth sawfish.

‘The fact that we spent so much time trying to catch them in rivers where we know sawfish are found, and have caught so few, just highlights the fact that they are incredibly uncommon,’ Richard says.

‘There are still adults that are giving birth to pups, but the fact that we catch so few older animals, which we know don’t leave the river until they are five to seven years old, means the mortality of those young ones is very high and not many of the juveniles are surviving to become sub-adults. That has important implications and the reason is still unknown.’

Richard said modifications to freshwater river flows, increased crocodile numbers, and variation in rainfall between years, were thought to be potential factors dampening their recovery.

Conversely, the research has revealed an expanded range for the northern river shark.

‘We now know this species is found in a lot more rivers in the area between Darwin and the eastern boundary of Kakadu National Park than was previously thought,’ Richard said. ‘We have also caught adult, sub-adult and juvenile northern river sharks within the same river system.’

‘For speartooth sharks, however, we have only captured immature animals and it is currently unknown where the adults move to once they leave these rivers.’

Despite these results, Richard flags the need for caution.

“Certainly in some of those rivers the populations appear healthy, but the issue is that both river shark species are not found in many other rivers around Australia. They seem to prefer big, turbid, high flow rivers, so although they might be fairly abundant in some rivers, the overall distribution and habitat is still limited. In addition to this, we know very little about where these species occur in habitat outside of rivers and estuaries, as almost all records come from a few rivers.

‘We need to wait for the final results of the project that assesses the population status to see whether they are increasing, declining, or stable.

‘Our goal is to support the recovery plans for these species and to provide guidance for managers needing to make decisions about proposed activities.’

Peter and Richard have been assisted with their research, and with access to rivers, by Northern Territory Fisheries, Traditional Owners and Indigenous ranger groups, cattle station owners, and interns and volunteers from Charles Darwin University.

CSIRO’s Richard Pillans with a northern river shark, a species whose numbers appear healthy in some rivers. 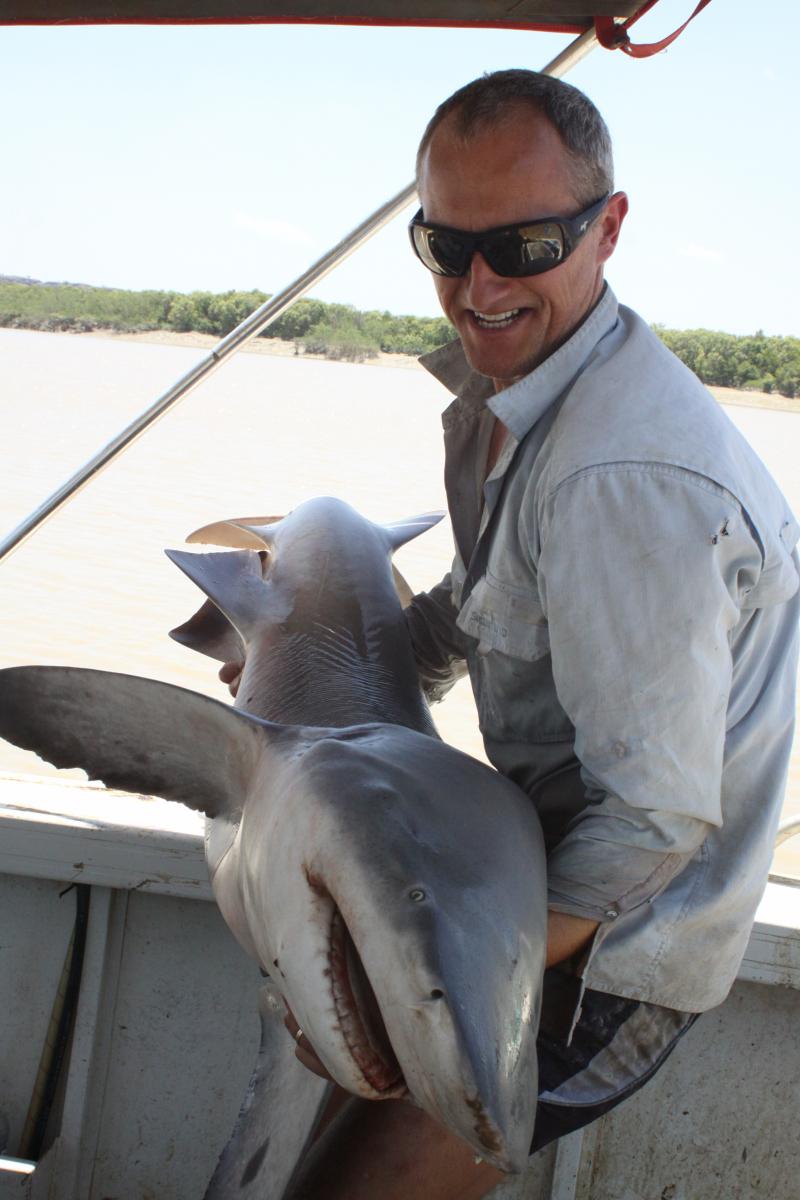 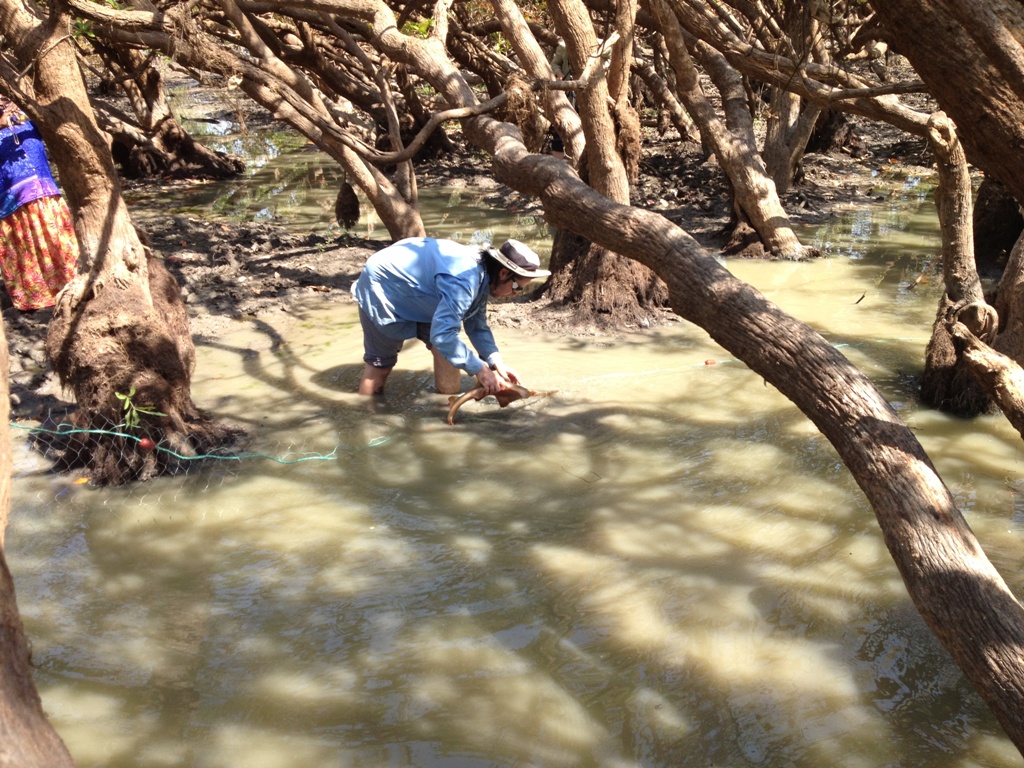 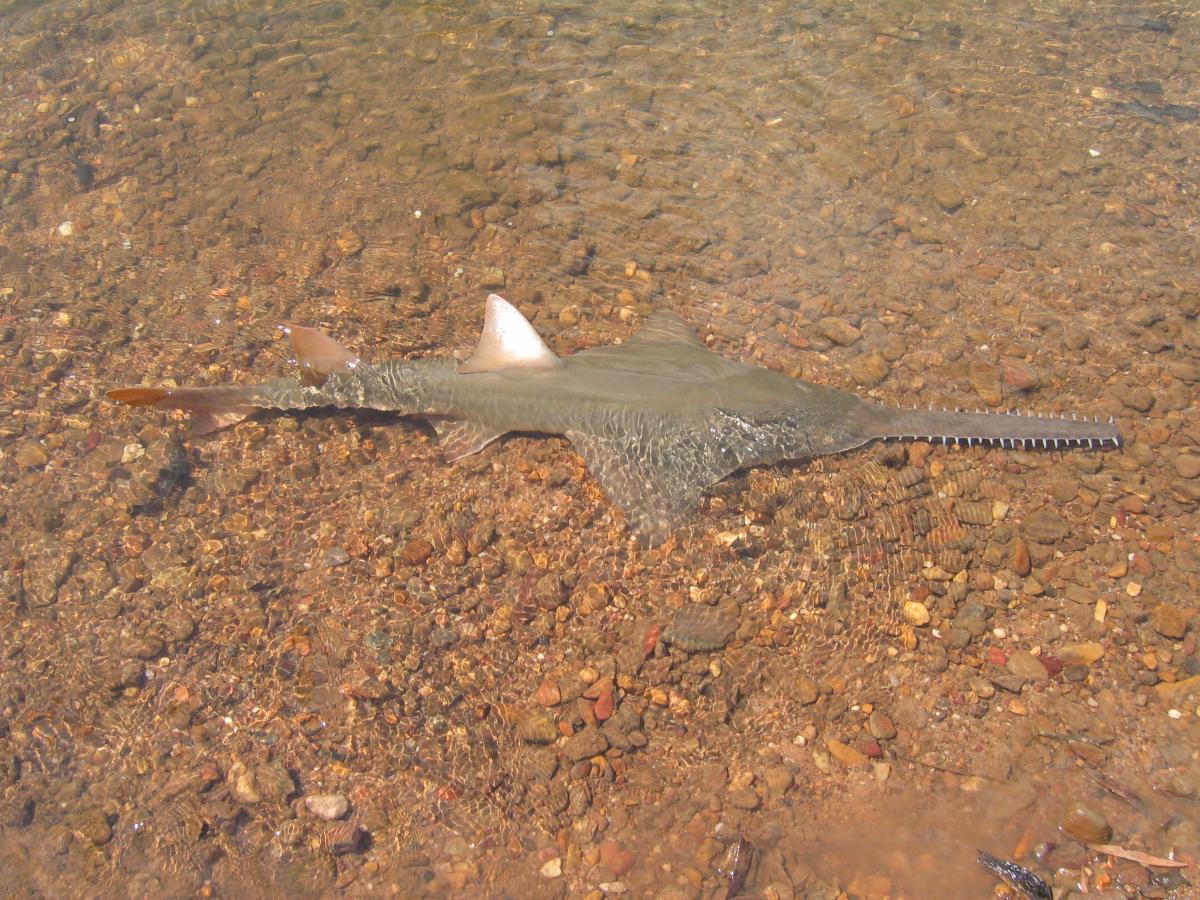