Giant stingray comes out of hiding

Giant stingray comes out of hiding

A new species of giant stingray has been named after being encountered by scientists in northern Australian rivers, coastal Papua New Guinea and the Arafura Sea.

‘This is one of the world’s largest stingrays, growing to a width of at least 1.6 metres, and it occurs in both rivers and marine waters,’ Dr Peter Kyne of CDU says. ‘It’s amazing that it has avoided classification for so long, and great to see the sightings by various research teams working over many years in different areas coming together to enable it to be named.’

The unusual yellow-grey blotched ray was first caught and sampled in 1999 by scientists on an American National Science Foundation project to survey fish parasites (tapeworms) in the Arafura Sea off Australia’s Northern Territory. Molecular work by Dr Gavin Naylor at the College of Charleston in the United States as part of a project classifying the Tree of Life of all sharks and rays a decade later confirmed it was an unknown and unnamed species.

A decade and a half after the first discovery, Dr Kyne found three young specimens in the tidal rivers of Kakadu National Park and two in the Kimberley region of Western Australia during shark and ray research for the National Environmental Science Program Marine Biodiversity Hub. Further specimens turned up in bycatch samples from the Gulf of Papua trawl fishery in Papua New Guinea (PNG) during a project funded by the Australian Centre for International Agricultural Research, indicating that the new species had a wide range in the region.

‘It was exciting to finally have enough evidence to describe and name the species,’ Dr Kyne says. ‘All of these records indicated that juvenile Mumburarr Whipray seem to occupy tidal rivers, while adults occur in the ocean.’

The species name acanthobothrium recognises the tapeworm group found and named from the Arafura Sea whipray specimen caught in 1999. The common name Mumburarr is a local Limilngan language name for stingray used by the Minitja people of the West Alligator River region.

‘Traditional Owners within Kakadu National Park chose the common name, recognising the use and importance of stingrays in traditional culture,’ Dr Kyne says. ‘Unravelling the mystery of this giant stingray involved many people across northern Australia and PNG coming together to document its existence. It makes you wonder what else is out there.’ 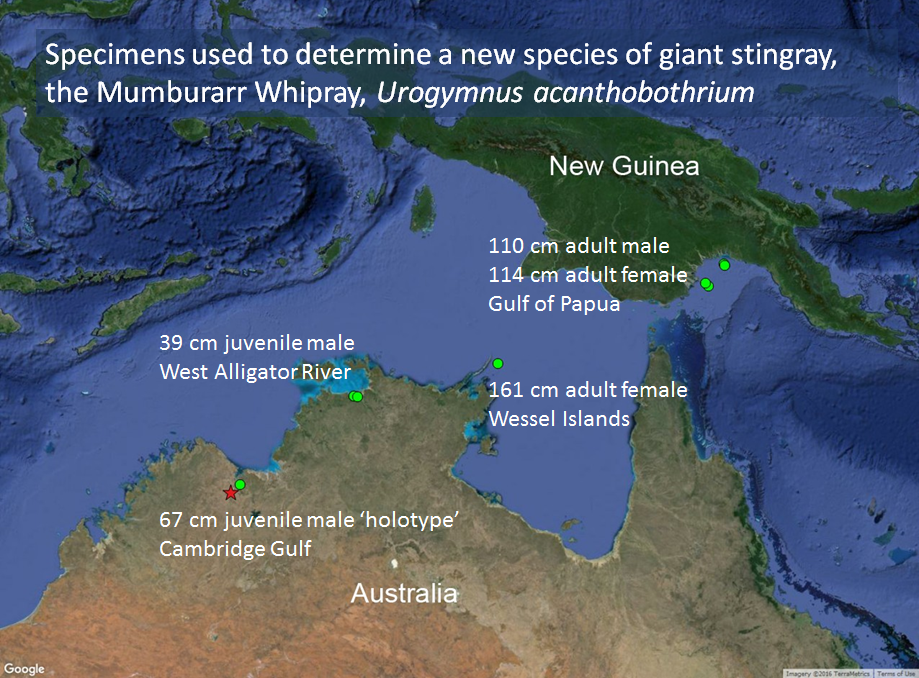 Top right: This 390 mm-wide juvenile male was caught in the West Alligator River of the Northern Territory. Image: P. Kyne

Top right centre: The juvenile male ‘holotype’ of the Mumburarr Whipray was collected by Dr Peter Kyne in the West Arm of Cambridge Gulf, Western Australia, during shark and ray research for the Marine Biodiversity Hub.

Top right lower: The ventral surface of the juvenile holotype.