Five submarine ‘super canyons’ have been identified off eastern Australia in a study that matched canyon environments with the needs of marine life.

Submarine canyons are steep-sided valleys cut into the sea floor that trap nutrients and attract a diversity of marine life. They funnel nutrient rich waters up onto the continental slope and shelf, fuelling feeding grounds for fishes, whales and other cetaceans. Communities of sponges and corals grasp their hard walls, and the tiniest of creatures collect in their sediments.

Australia has more than 750 submarine canyons. Most of these are in the south, and many are in Australian marine parks, or form key ecological features (areas of exceptional ecological value). All these canyons have now been rated for their habitat potential, in a Marine Biodiversity Hub study led by Geoscience Australia. This is the first time that the physical variability of Australian submarine canyons has been related to likely habitats and marine communities. To visit all the canyons would have taken forever, so how were the super canyons picked out from their counterparts? 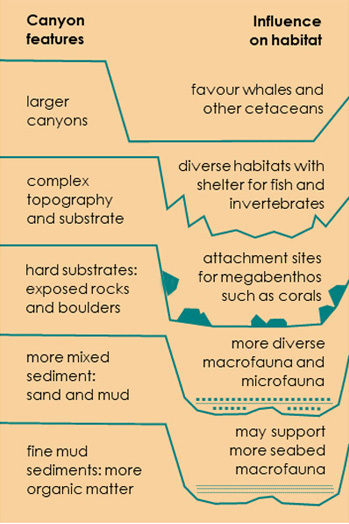 Rather than going to sea, the research team scoured previous studies for links between canyon features and marine life (see the table). Using this knowledge they developed and applied an analytical framework for estimating the potential of individual canyons to support pelagic (open ocean) and benthic (seabed) species, including bottom-dwelling fishes.

Four aspects of canyon habitats ­­­­­­­– shape, size, topography and substrate type – were of particular interest and could be gleaned from seabed mapping. Assessments of organic matter, inorganic nutrients, oxygen and chlorophyll-a (a sign of phytoplankton), and oceanographic factors such as currents, were used to rate levels of productivity. Based on the available information, 22 environmental features were analysed as signs of habitat potential.

Super canyons in the east

The five super canyons were located off the Great Barrier Reef and the New South Wales coast and had particularly high habitat potential for both pelagic (open ocean) and seabed animals. Next in the ranking were canyons east of Tasmania, in the Murray group off South Australia and the Albany group off southern coast of Western Australia.

Most of the super canyons have complex bottom topography, and are situated in narrow parts of the continental margin nearer to terrestrial nutrient sources and with bottom currents that deliver food particles and generate intermediate 'disturbance'. They also are brushed by the East Australia Current which, aided by frequent, wind-driven upwelling events, lifts nutrients from deeper waters towards the surface.

The results showed that in general, canyons that bite into the continental shelf tended to score higher in habitat potential than those confined to the slope. And overall, canyons provide a better neighbourhood for animals that live in the seafloor sediments than for those that live above them.

The framework for assessing canyon habitat – once refined and validated with ecological data – can support conservation and management decisions, especially for high value canyons, such as the prioritisation of monitoring, which might focus in the east, and to a lesser degree the south.

Apart from the habitat potential of these canyons, however, little is known about them. Multi-disciplinary surveys and studies are needed to collect baseline environmental and biological information, and understand more about these important ecosystems.