Sustained, coordinated monitoring is vital to national biodiversity assessments, but few such programs exist for Australia’s marine environment. This study shows that data collected by volunteer divers can fill the gaps. 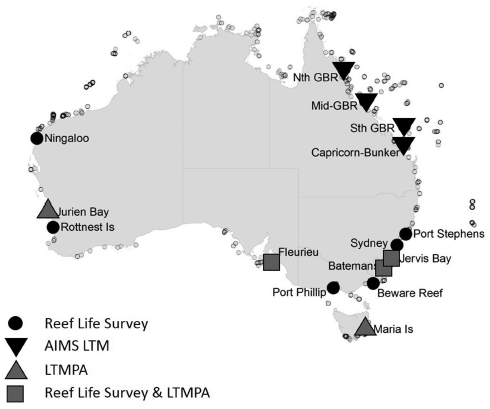 Surveys conducted around Australia by recreational divers underpin the national shallow reef biodiversity assessment reported this month in the Marine environment chapter of State of the Environment 2016.

The divers are part of Reef Life Survey, a Hobart-based citizen science program in which trained volunteers collect marine biodiversity data (in waters less than 25 metres deep) at scales impossible for researchers to cover.

They surveyed 5930 rocky and coral reef sites in 2010─2015, enabling the assessment led for the Marine Biodiversity Hub by Dr Stuart-Smith of the University of Tasmania (UTAS) Institute for Marine and Antarctic Studies.

Together, the three programs highlight a widespread imprint of fishing on shallow reefs, particularly on coastal areas of south-eastern Australia, and severe local effects of warm-water events in the west.

A key finding of State of the Environment 2016 was that Australia has few sustained marine biodiversity monitoring programs beyond commercial fisheries assessments. This makes national assessments impossible for many species and species groups.

Marine Biodiversity Hub director, Professor Nic Bax, a co-author of the SOE 2016 Marine environment chapter, says Reef Life Survey is probably a rarity in the level of effort it expends on training the citizen scientists. 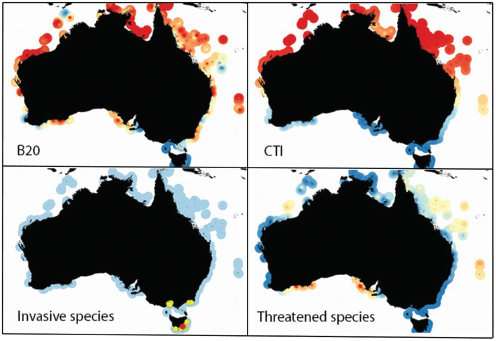 The distribution of values of indicators of reef biodiversity in relation to fishing pressure, ocean warming, invasive species, and threatened species, based on Reef Life Survey data collected at 1294 sites. B20 is the total biomass of fishes 20 centimeters or larger, and CTI is the community temperature index. Invasive species were plotted for sites at which they were recorded, with yellow indicating up to 30% of individuals belonging to invasive species and red indicating values from 30% to 95% of individuals. Otherwise, red represents the highest values and blue the lowest (zero for invasive and threatened species).

The assessment team chose ‘biomass of fishes 20 centimetres or larger’ (B20) as the best indicator to represent and compare fishing pressure across the diverse range of Australian shallow reef habitats.

“When we mapped B20 around Australia, the recreational and commercial fishing impacts on shallow reefs were widespread. The greatest impacts were close to large population centres on Australia’s east coast, in the southwest, at Ningaloo Reef, and northwest.

Marked effects of ocean warming in the west

Community temperature index (CTI) was the indicator chosen by Dr Stuart-Smith’s team to report on ecological state of shallow reefs in relation to short-term ocean warming (based on data from the past 10 years). CTI measures the average climatic niche of a community, and has been used to see whether communities of birds and butterflies are shifting range fast enough to keep up with climate warming.

The most notable changes in CTI were in Western Australia following a marine heatwave in 2011 and in a subsequent warm year in 2012. Changes in the fishes at Rottnest Island between years were as substantial as the difference in temperature niche between Rottnest Island and locations more than 250 kilometres farther north.

In other words, someone snorkelling or diving around Rottnest in 2010 could have gone to the same place in 2011 and seen the different mix of species usually found in the warmer waters of Jurien Bay. This mix of species has slowly started to return back to what was found in 2010, but it is unknown whether it will ever return to what was typical of before the heatwave. 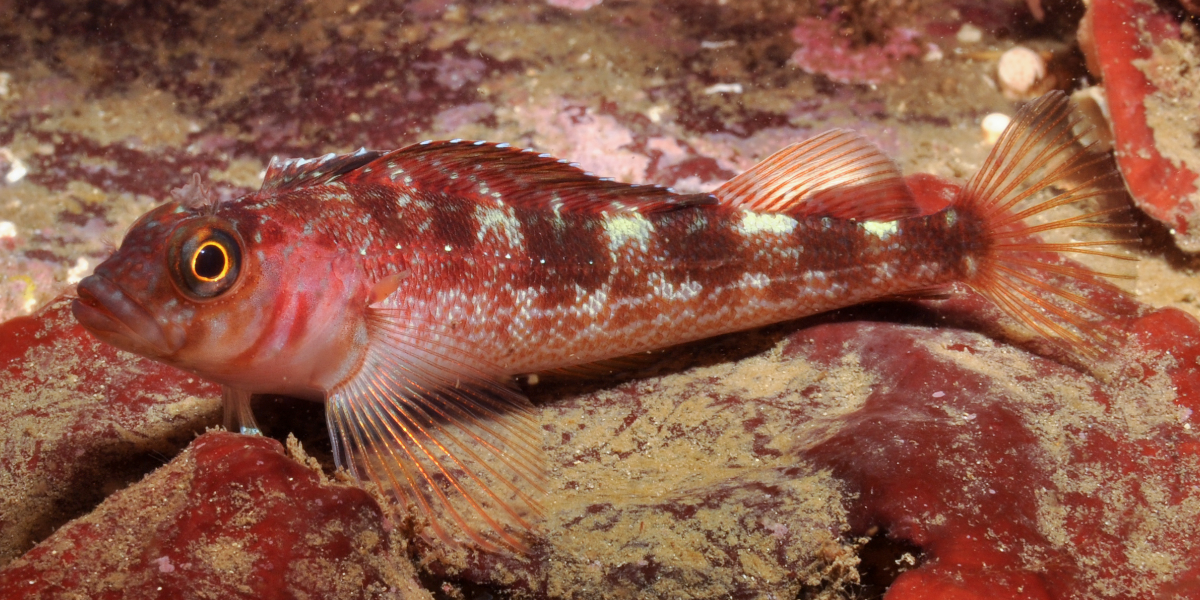 The many-rayed threefin (Fosterygion varium) may look at home at Ninepin Point in Tasmania's D'Entrecasteaux Channel, but it's actually an invasive species from New Zealand that has become ubiquitous on the shallow reefs of south-eastern Tasmania. Image: Rick Stuart-Smith

The assessment identified local high densities of invasive species on shallow reefs in the southeast, ranging up to 100% of individuals surveyed in Hobart. These included crabs, snails, sea stars and small fishes.

Overall, however, the relatively small number of invasive species found on shallow reefs throughout other parts of Australia was a very promising sign. But the assessment highlighted a need for a better national system for monitoring sessile (attached) invasive species in harbours around Australia. 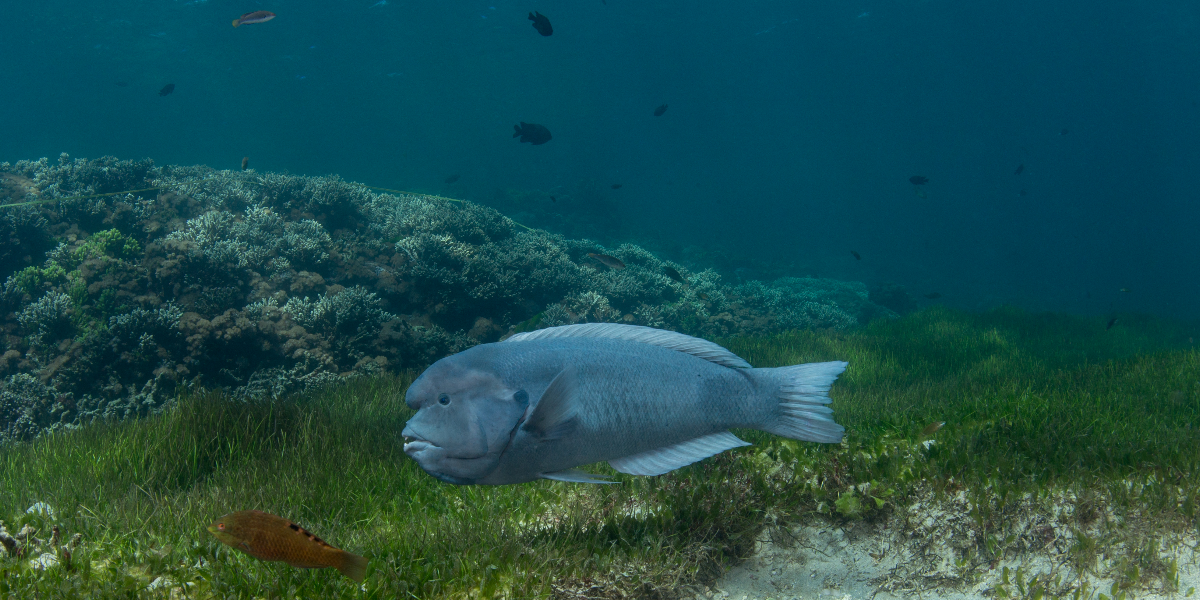 The doubleheader wrasse (Coris bulbifrons) has a very restricted range, occurring only near a few small islands and shallow reefs in the northern Tasman Sea where it is fished locally. Its area of occupancy is estimated to be less than 2000 square kilometres, and like most large wrasses, it is particularly susceptible to fishing pressure. Image: Rick Stuart-Smith

“We’ve shown that volunteers contributing data alongside scientific teams around the country can provide the public and policymakers with a vastly greater understanding of the true state and trends in marine biodiversity,” Dr Stuart-Smith says. “The future of marine biodiversity reporting, not just nationally but globally, may rely on well-designed and coordinated citizen science, given the limited funding and scientific resources.

“High-resolution time-series data could be generated on a global scale through coordination with international initiatives such as The Group on Earth Observations Biodiversity Observation Network, the Global Ocean Observing System, and the Smithsonian Institution’s MarineGEO. These programs are all part of a growing impetus for a global marine observation network to collect large scale biodiversity data.”

Marine Biodiversity Hub researchers and research users contributed data and expert assessment for many sections of the marine chapter in State of the Environment 2016. More than a quarter of the 150 marine experts contributing to SOE 2016 are involved in Hub research and delivery.